It was about two years ago that I started to think about how to record the bike. From time to time, I ride a Commencal Premier HD4 myself and was pretty interested in the interaction between the bike, the different ground surfaces and the speed from a first person view perspective.

During this time, I looked for convenient places and times to record so once “rolling” I would get less noise interference (i.e: traffic, other cyclist, noisy groups of people etc…). As I was aiming for a good amount of variation in the recording, I thought La Casa de Campo in Madrid was a pretty good match. It is a large park not far from home that has a good range of different surfaces like sand, grit, pavement and cycle lanes. It also has quite an irregular terrain, so I would get recordings both in flat roads and slopes. However, being one of the most popular parks in Madrid among families, runners and cyclists I would have to consider what would be the times with less affluence. After discarding nights and winter, I went for an unbearable summer time with temperatures close to 40ºC. That would definitely give me some wanted quiet space.

While scouting, and having pretty clear that I needed gear mounted on board to better capture the first person view, I investigated on suitable ways to have the microphones in place. Having in mind techniques to mic on different types of vehicles I identified some of the factors that would impact the recording such as the amount of weight supported, wind and microphones location. Besides, I began on looking ways to attach the microphones to the bike in a safe way, something reliable enough that I wouldn’t regret on using with some of my beloved mikes and that wouldn’t pose a risk to other cyclists in that particular order. That’s where a combination of a Manfrotto Superclamp 035 and a Manfrotto 026 adaptor came just handy.

I planned for a first recording day with the purpose of exposing anything that I could have overlooked. For security reasons, one of the first things I decided was about leaving the headphones at home. Then, to ensure the recorder would not clip and due to the impossibility of monitoring levels at real time while riding, I set the gain and sensitivity to low. I mounted a Sony PCM-M10 handheld wearing a windjammer, connected through a Rycote extension handle into the seatpost and pointing out to the back wheel; then started riding… and the Manfrotto adaptor slid down shortly afterwards. I stopped to fix it up and went on happily riding… On high speeds the battery lid from the M10 would open and rattle. Other than that, everything felt great!. 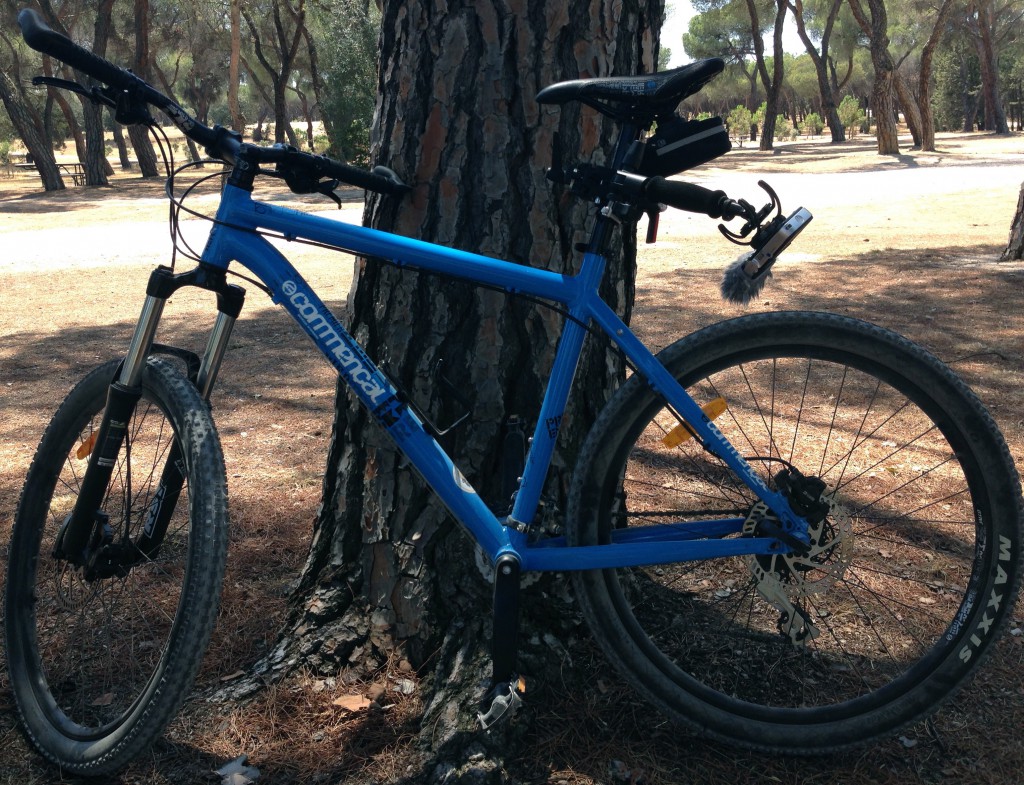 A few kilometers after, I changed the microphone’s location into the head tube pointing out to the front wheel. I angled the mic so that it would face the wind backwards, which proved to be the right thing with wind resistance hitting the microphone capsules at high speeds. 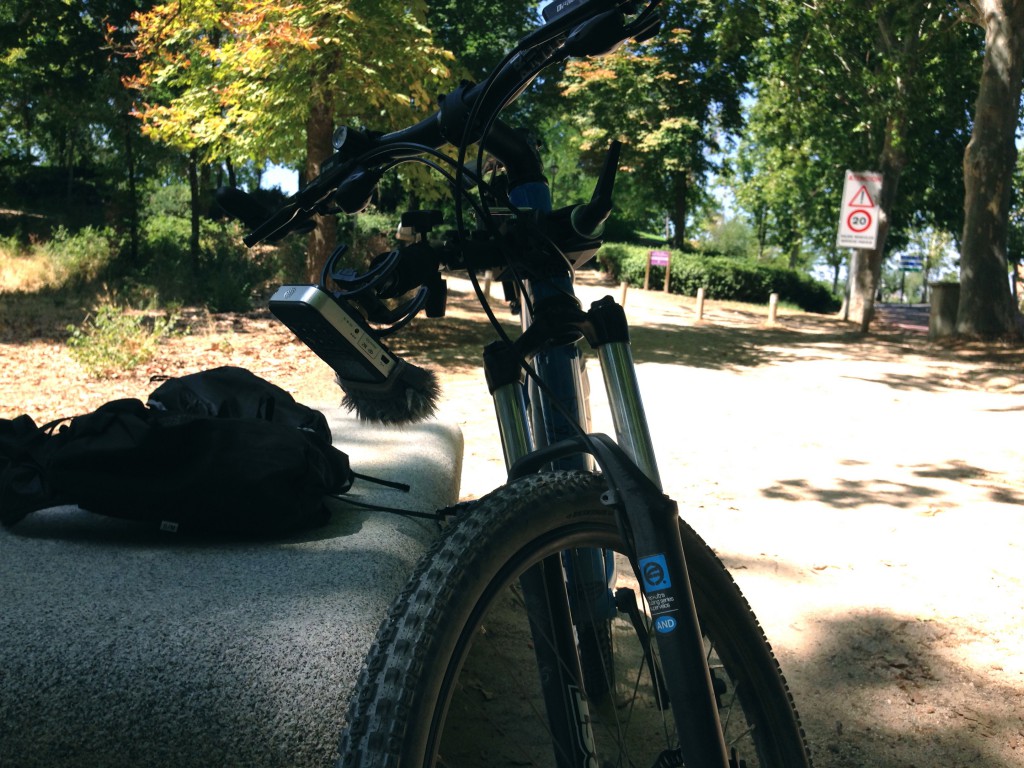 Later, once in post I came with some learnings for further improvements:

1. Even if you set the gain at a low setting, you’ll need to watch out depending on where you place the microphone. I was getting a pretty high level so any bumps or transients would still clip. In next recordings I would need to put the microphone farther from the wheels.

2. Remember to remove any noisy objects you have in the bike. I had a couple of keys in the saddle bag and they were constantly hitting each other. That bled into the recordings. A shotgun microphone, thanks to the off-axis rejection would help on damping other unwanted noises.

3. The suspension for the M10 was not enough to prevent the worst of bumps etc depending on the ground type. I would need to place a better suspension system.

Once finished, and aiming for the next week I started planning for a second recording session. This time around I was ready to set a Sennheiser MKH60 within a Rycote windshield and windjammer. As the setup was going to be a bit bulkier I tested and mounted everything at home before going out. I tightened the XLR with cable ties placed along the frame into a rucksack where I fit a Sound Devices 702. In this occasion, besides the extension handle from Rycote, I screwed the pistol grip into the Manfrotto adaptor to make up for more distance between the microphone and the wheels. 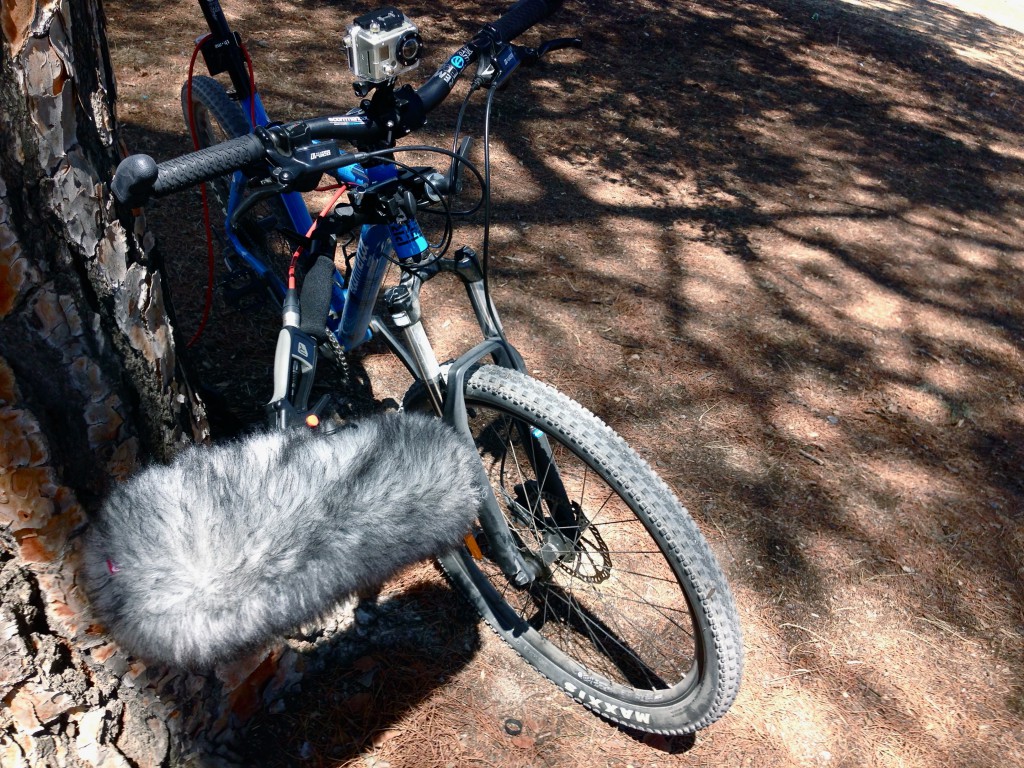 In the field I checked out different positions and angles pointing out the MKH60 to the cassette, brakes and the crankset. Then, once biking I captured both pedaling and freewheeling in all ways possible and all ground surfaces available.

Things that I plan on working out some time in the future include other perspectives like stereo recordings of pass bys either in M/S or ORTF. Furthermore, there is still some to get recorded even at closer perspectives on the crankset and brakes along with the brake levers and changing gears. I am still thinking about using a couple of DPA4061s or wait some months for the release of the Instamic Pro.

What other factors do you consider when recording bikes?

← ELOGOXA – Once Upon a Time
Recording Water – Part I →